A lot of people turned up at De Meldkamer on Sunday, Capucijnenstraat 21 in Maastricht, on the afternoon of the 3rd of July 2022.

It was lovely to share this moment with you, a wonderful afternoon in which we had the chance to have a refreshing drink and chat while enjoying the exhibition together as the changing exhibition ‘Think Again’ curated by Riet Meeus – the second exhibition of our project ‘Art through the Window’ – finally came to an end. 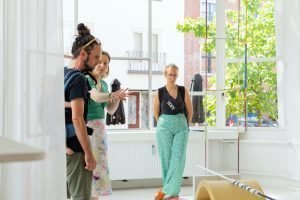 The exhibition ‘Think Again’ was developed to be constantly ‘re-thought’ to incorporate new artworks. The title of the exhibition was taken from the homonymous book by Adam Grant. In his book, the Organisational Psychologist focused on the art of rethinking – the art of learning how to question your own opinions and open other people’s eyes to different points of view.

At the opening on the 10th of June, it featured works by Maastricht-based artists Famke Storms and Jules Coumans. On the banners their names were followed by a ‘& 2 whose names are yet to be announced’. 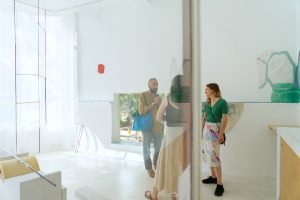 The display has been developed thanks to a dialogue about the materiality, physicality, and context of each artist’s work. Each is connected by the importance given to lived spaces. Artist Jules Coumans (Maastricht, 1998) is guided by a fascination for public spaces, and many topics relevant to this domain. A great deal of his visual works consist of paintings, photographic and sculptural pieces. Artist Famke Storms (Heerlen, 1997) finds inspiration in her own atelier. Fragments of previous pieces, like paintings or paper cuttings, are constantly re-used in her installations.

An on-going conversation between the artists and the independent curator Riet Meeus, which evolved over time, adjusting to incorporate different perspectives under our eyes. Just as Adam Grant explained – different factors influenced the way we saw and experienced the artists’ works and, since these were subject to constant fluctuation within the exhibition, our perception can changed. 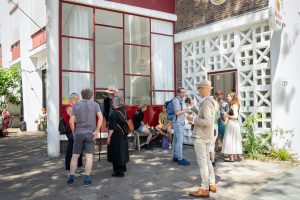 Indeed, during the second week, artist Dirk Bours (Maastricht, 1981) was invited to join. Looking for ways to interact with the urban through his works, he develops paintings and installations drawing basic materials, constructions, and shapes from the urban landscape. The last weekend, it was artist Nieke Lemmens’ (Maastricht, 1963) turn . She developed a temporary site-specific piece with a minimalistic visual language as a direct response to the surrounding environment and other artists’ work, integrating natural elements – light, time and space. 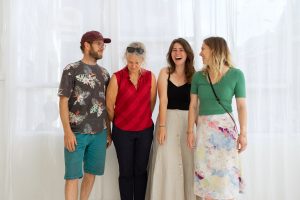 It was a lovely moment to pause to look at how the exhibition evolved over time and at how it reflected this progress.

Thank you to everyone who was able to pop round, enjoy the afternoon and ‘re-think’ with us.