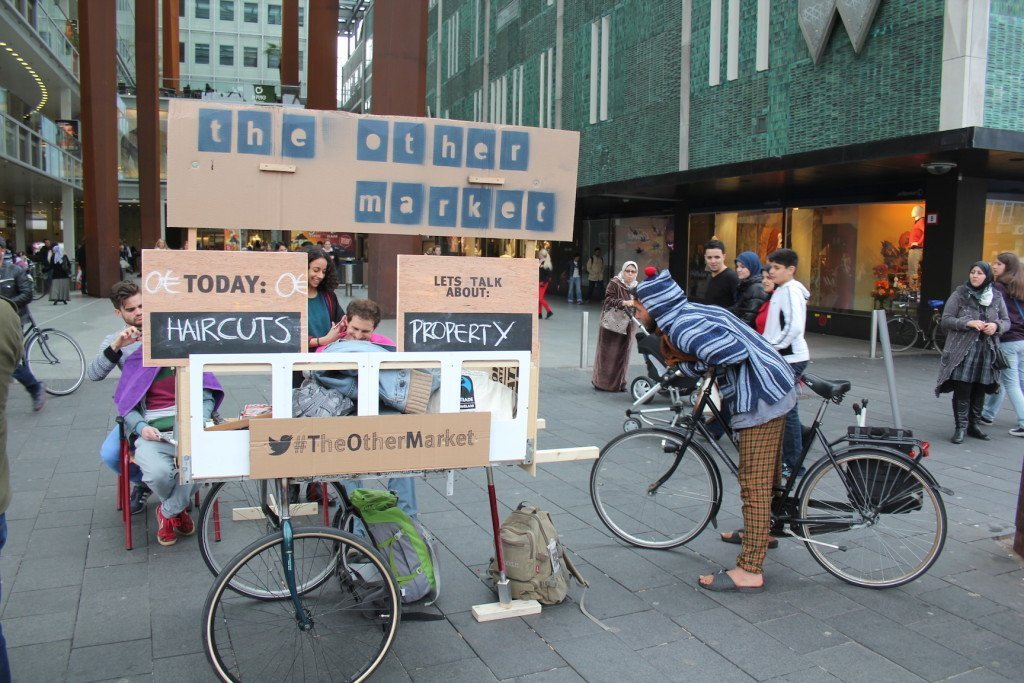 Can you tell us a little bit about yourself ?

My name is Pablo and I am originally from Colombia; four years ago I went to study at the Design academy in Eindhoven. There I followed a master course called social design, -although today I am very critical to the name, for I don’t think ‘social design’ exists: I think it’s just a new name we give to “things” we have been doing for long time. In any case, at that time I did it because I thought it was a different way of thinking about “design”; what design was and meant.

Afterwards, I started to build up my practice, focusing on projects based on interventions in public space, which –most of the times- include participation of the public. It’s a more hands on vision of design practice, with experimental approaches rooted in a specific time and place.

After I finished the master I went to Rotterdam to do an internship with the artist Jeanne van Heeswijk, on her project Freehouse. In this period I learnt more about “community engagement” and gained very valuable experience.

Then I moved to Belgium, after I was selected from an open call for the project TRADERS, of which I am currently part of. TRADERS is a European research project, in which 6 researchers –me included- look into how artists and designers can work in the public sphere in participatory ways. Each of us has a different approach and mine is intervention.

This is what brought me to Genk, and the context in which we have started De Andere Markt.

What would you consider your distinctive achievement?

Ok, first let’s go back to the conflict I have with the term ‘social design’. It’s funny, because I am very critical about this term, but when people see my work, they immediately say, “it’s very social”. And it’s true: it’s very social in a way; people can acknowledge the collective value of the work that I’ve done. That being said, I think only others would be able to speak about my ‘achievements’. Now, if you ask me, I would say my distinctive achievement is the ability to have built a practice that can create some value for others.

In general (to my practice); I am engaged in processes of social –I also don’t like the word “change”- transformation (it’s the ‘trans’ that makes the difference). With that in mind, I look forward to making sense, and being relevant; even if it is through small things.
In particular (to this project); I am looking forward to see the process that we’re starting here with “De Andere Markt” being embraced by the community and that they will put in practice by themselves. In short; that what we do can make sense and be relevant for a wider context then only ourselves.

Which advise will you give to other professionals?

The other day, a friend asked me; “what do you think design education is missing?” I told him “I think it’s missing context.” We, as designers –but also as human beings- tend to over-specialisation, really go deep into one thing; this is of course not negative in itself, but sometimes it doesn’t allow us to see the wider context.

In these cases I always speak about Victor Papanek, author of the book “Design for the real world”, where he said “the problem with design education was that it focused too much on design, and too little on the social, environmental, political and economical context where design takes place”. So the advice is to avoid overspecialization, and allow yourself to see the wider context you are working in. But also, try to have a good dose of cooperation and coproduction. This allows you to constantly gain new perspectives and avoid over-specialisation.

Thus, I think it is more about how to encourage proactivity in the cultural field, and perhaps it is connected to the previous question: it is related to connections, collaborations. Forgetting about the structures of competition that are being imposed on us, and see how we can build networks of values. That makes you reflect about what you can do, and this is the essence of being pro active.

But, at the same time that we feed this proactivity, we have to keep a critical eye on what we do. Without criticality you won’t evolve much in your practice. But it’s always important to avoid criticality to turn into stagnating criticism. This is why it is important to keep a balance between pro-activity and criticality; action and reflection.